Separated (Sabine is searching for him)

“Those two can't go anywhere without blowing something up.”
―Zeb

The relationship between Jedi Padawan Ezra Bridger and Mandalorian Sabine Wren was one of the main aspects of Star Wars Rebels. Through their struggles against the Empire, Ezra and Sabine built a strong relationship built on trust, possibly the first friendship between a Mandalorian and a Jedi since the Clone Wars. They were the youngest members of the Ghost crew, initially having a rough relationship after having a rough turn of events. They eventually developed a closeness with one another, becoming best friends. 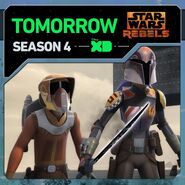