Jai was an Imperial Cadet at the Imperial Academy on Lothal, training to become a Stormtrooper. While at the Academy, he becomes good friends with Zare Leonis and Ezra Bridger who was undercover as Dev Morgan. After Ezra succeeds in sneaking into Imperial Headquarters to steal an Imperial encoder, he over heard that The Grand Inquisitor intended to take Kell prisoner. Bridger, with the help of Zare Leonis, rescues Kell, and the three hijack an AT-DP Walker to fight their way out of the Academy. The rebels then return him to his mother and they both went into hiding from the Empire. Four years later when the Spectres returned to Lothal, Jai was a member of the Lothal resistance led by Ryder Azadi. He encountered them once again after thye had been sent by Rebel Alliance leader Mon Mothma. Jai helped Ezra and Sabine avoiding detection and arrest. He later helped the rest of the Spectres escape the occupied city of Jhothal through the sewer system. He later helped recover the hyperdrive of the stolen TIE/D Defender Elite prototype, and assisted in destroying the air defenses placed to defend the Imperial Armory Complex. 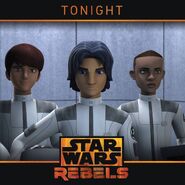