Star Wars Animated Wiki
Register
Don't have an account?
Sign In
Advertisement
in: Droids of the Galactic Empire, Droids of the Rebel Alliance, Masculine Programming,
and 4 more

AP-5 has a grumpy, pessimistic, irritable and cynical personality due to his exploitative treatment at the hands of his Imperial superiors. He greatly prided his service as an analyst droid during the Ryloth campaign and deeply resented being relegated to inventory work under the Galactic Empire. AP-5 has an antagonistic relationship with his Imperial captain, who had little regard for the droid and thought that he was merely destined for the scrap heap.

AP-5 found an unlikely friend in the form of Chopper, an astromech droid who is part of the Rebel Alliance. AP-5 gained Chopper's trust and friendship after he removed his restraining bolt; giving AP-5 the will to defy his master. Despite his friendship with Chopper, AP-5 can still be abrupt and condescending to his friend. This was evident when he berated Chopper for committing the "illogical act" of sacrificing his stolen ambulatory strut to repair him.

Despite having engaged with the Rebels for only a short time, AP-5 has already formed an attachment to them, as he seemed genuinely saddened to learn of Ahsoka Tano's apparent death. 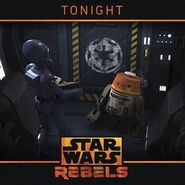